TikTok and WeChat: US to ban app downloads in 48 hours 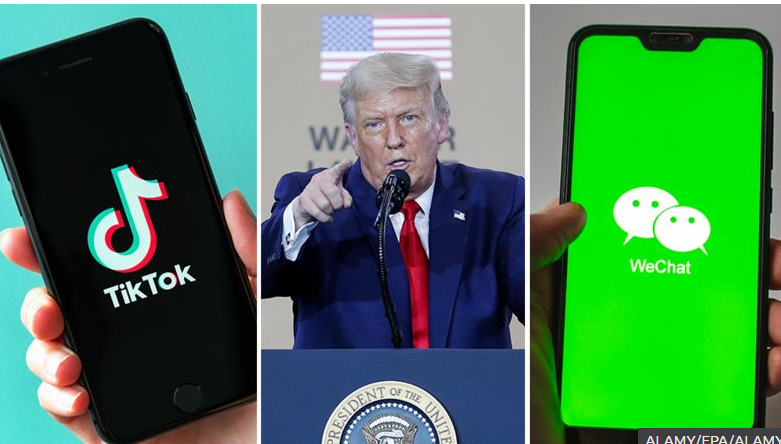 TikTok and WeChat will be banned from US app stores from Sunday, unless President Donald Trump agrees to a last-minute deal.
The Department of Commerce said it would bar people in the US from downloading the messaging and video-sharing apps through any app store on any platform.
The Trump administration says the companies threaten national security and could pass user data to China.
But China and both companies deny this.
WeChat will effectively shut down in the US on Sunday, but people will still be able to use TikTok until 12 November, when it could also be fully banned.
TikTok said it was “disappointed” in the order and disagreed with the commerce department, saying it had already committed to “unprecedented levels of additional transparency” in light of the Trump administration’s concerns.
“We will continue to challenge the unjust executive order, which was enacted without due process and threatens to deprive the American people and small businesses across the US of a significant platform for both a voice and livelihoods.”
Tencent – the owner of WeChat – said the announced restrictions were “unfortunate”, but said they would continue talks with the US government “to achieve a long-term solution”.
The ban order from the Department of Commerce follows President Trump’s executive orders signed in August. It gave US businesses 45 days to stop working with either Chinese company.
If a planned partnership between US tech firm Oracle and TikTok owner ByteDance is agreed and approved by President Trump, the app will not be banned.
Mr Trump told reporters on Friday he believed there could be a deal on TikTok “quickly”, adding that while the US needed “security from China”, TikTok was “an amazing company, very very popular.”
“Maybe we can keep a lot of people happy but have the security that we need,” he said.

What does the order say?

“At the president’s direction, we have taken significant action to combat China’s malicious collection of American citizens’ personal data,” the US Department of Commerce Secretary Wilbur Ross said in a statement.
The department acknowledged that the threats posed by WeChat and TikTok were not identical but said that each collected “vast swathes of data from users, including network activity, location data, and browsing and search histories”.( BBC News)
0 Likes